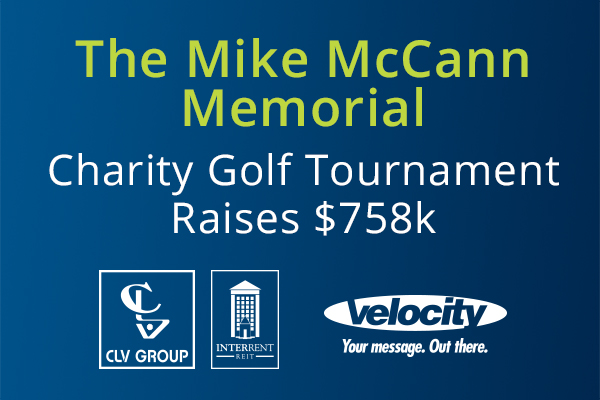 In 2017, we retired the Annual Ron Kolbus Memorial Golf Tournament in it’s 20th year. During its 20 years, the tournament was successful in raising over $3.2M for charity, an amount that our dear friend Ron Kolbus would be so proud of.

The driving force of this yearly event, and the one who made it such an incredible and successful event was Mike McCann. Unfortunately we all lost him this past February to his battle with cancer. To commemorate the life and legacy of Mike and the impact he had on this community and everyone he worked with, we decided to bring the tournament back this year in his name.

The Mike McCann Memorial Charity Golf Tournament took place on Thursday, September 12th at the Meadows Golf & Country Club. It was a SOLD OUT tournament with 288 golfers, 400 attendees for dinner and an overwhelming response from our sponsors….a turnout we know Mike would have been very proud of.

The sun was shining as golfers arrived in the morning. Following registration, golfers enjoyed coffee from Tim Horton’s courtesy of the Snow Suit Fund along with a BBQ lunch. They also had the chance to win prizes on the putting green and through the purchase of raffle tickets and 50/50 tickets. Silent auction was also set up with an incredible amount of items that participants were able to bid on. Throughout the course, golfers had the chance to participate in multiple contests, including the ability to win 3 cars courtesy of Mark Motors Audi and Porsche, and Surgenor Automotive Group, and $10,000 courtesy of Binks Insurance. Following golf, participants were invited into a packed dinner reception room where cancer survivor Kimberly Mountain shared her very touching story of how the Ottawa Hospital saved her life. Ryan Watson, MC and auctioneer for the evening, kept the energy high as we auctioned off prizes and announced winners for all the course contests.

We are beyond thrilled to announce that the Mike McCann Memorial Charity Golf Tournament raised a total of $758,375! We are truly overwhelmed and speechless by the support of our participants, sponsors and volunteers. This wouldn’t have been possible without you, and we know Mike McCann would be so proud and honoured.

A big thank you to everyone who contributed to making this event the success that it was.